”The New Jungle Orchestra transforms its American, Latin and European sources into original music that is imaginative, fresh and personal. Mr Dorge himself is a real find, an electric guitarist who has integrated influences from Arabic and African stringed-instrument music, bebop and rock into a creative and colorful style of playing that virtually sings”

”There may not be a more infectious force in jazz than guitarist Dorge and his freewheeling Danish ensemble.”

”In 1980 Dørge founded the twelve-piece New Jungle Orchestra, which has since been touring most of the world presenting mainly Dørge’s own music, which mixes inspirations from Duke Ellington and Ornette Coleman as well as Balinese and WestAfrican music into a synthesis that never loses its basic jazz flavor. The New Jungle Orchesta was the official Danish state ensemble from 1993 through ’96.”

”Revelations in the Jungle.

The New Jungle Orchestra and Yusef Lateef presented an absolutely phenomenal and boundlessly copious concert inside the Opera House.

There are certain special moments in life when it all comes together into a higher synthesis. “It all rolls into one”, as they say. In a certain way, everything becomes divine – if we understand the divine as something that is infinitely greater than the respective individuals who bring it forth…”

Here was European jazz at its best. The New Jungle Orchestra.”

In front of a full house this most original, unpredictable, energetic and humorous band played their first concert in South East Asia at the ”No Black Tie” jazz club in KL.”

” There’s something rockin in Denmark.

The NJO’s latest album ”Dancing Cheek to Cheek”, does not contain a dull moment, thanks to Dorge’s imaginative charts: straightahead, free jazz, world music, even moment of Zen… ”Dukish Mingus” boasts a ”walking” trombone-part of an exciting ’bone duet by Kenneth Agerholm and Ray Anderson”

” Even The Moon is Dancing is the most ambitious and memorable of three NJO albums.

On side one, traditional and contemporary Africa meet, and so do instruments and techniques by the bushel. Updating and Africanizing The Mooche. Ellington’s circa 1929 composition for jungle orchestra ( an NJO namesake?) … A celebratory ostinato, spacious melodic intervals, and a bright Mandinkan vocal chorus precede Dørge’s ringing guitar lines. His solo captures the essence of African plectrists, though not without some Wes Montgomery octaves and free fretwork for good measure.

“The Danish guitarist creates an exotically hued, rhythmically vibrant music that is simultaneously sophisticated and accessible. Pierre Dørge’s NJO has been one of jazz’s most consistently engaging big bands of the last decade.”

In the book, “A Night in Tunisia – Imaginings of Africa”, by Norman C. Weinstein,

Pierre Dørge’s New Jungle Orchestra are the only Europeans portrayed side by side with top American jazz luminaries like John Coltrane, Archie Shepp, Yusef Lateef and Duke Ellington.

A few excerpts from the book:

“It is unabashedly one of Europe’s most sophisticated jazz bands”

“Dørge and band don’t simply reverently imitate the Ellington jungle-sound, but ironically and humorously carry that sound to its logical musical conclusion.”

Donald Elfman of AAJ once remarked, “Pierre Dørge has what seems like a magical ability – he can re-imagine and re-think the way that music is voiced thus creating entire new worlds out of worlds we think we know.”
His magical ability is at full throttle here on this extraordinary musical depiction of a fascinating country. 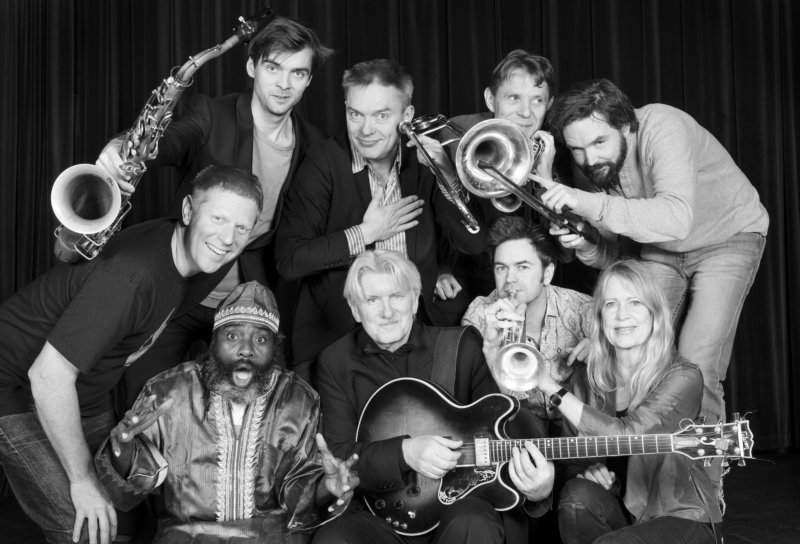 Pierre Dørge is one of the most prolific and wide-ranging figures on the Danish scene today.

New Jungle Orchestra was formed in 1980 and named after the legendary growling “jungle” sound of the early Duke Ellington Orchestra, some of whose compositions have appropriately been covered by NJO. Other major jazz influences that can be heard are Don Cherry’s group and Charles Mingus’ experiments with combining improvisation and large-scale forms with the mobility of a group that is sized somewhere between a traditional combo and a big band; the Gil Evans flux between forceful anarchy and carefully layered, complex structures; and the ironic cabaret touch of Carla Bley. The mere mention of names like these also indicate the level of innovation and artistry on which the NJO, in its 40-years of existence, has distinguished itself as one of the most original, intense and enjoyable groups to be heard on today’s global music scene. As things stand today, however, these are not the only jazz giants who – along with a large array of non-Western musics – have contributed to the New Jungle Orchestra’s sound. What we have here is “World Music”, in the most literal sense of the term.

From 1993-96 NJO was appointed by the Minister of Culture – to be entitled” The Danish State Ensemble” – they were representing Denmark, traveling with the Royal Danish family. They performed for the Japanese Emperor Akihito at his Akasaka Palace – Kofi Annan, former chairman for the United Nations in New York and former President Nelson Mandela at the National Theatre in Pretoria.